The story of Maison Polanka houses 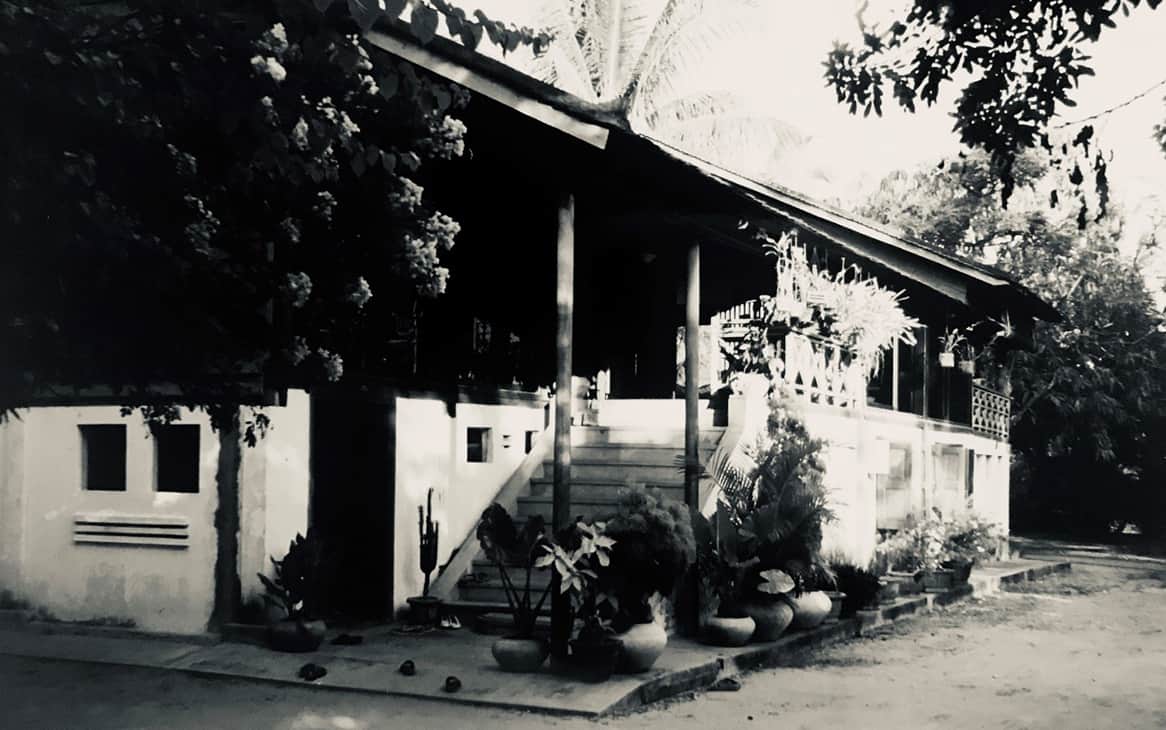 In 1992, Jean Pierre arrived in Siem Reap with the project of opening a vocational training school. He chose to rent this house, away from the city center and from the main streets, next to the pagoda Polanka and near the river. When Nathalie met him in Angkor in 1994, the house  acted like a magnet, as did the vibrations and atmosphere of Angkor, she fell in love with the place and the owner and decided to move to Siem Reap.

A home for extraordinary people, a place for spiritual encounters, the Polanka house was transformed according to the rhythm of family life. To see the stars, a terrace and an open-air pontoon were added. The wooden walls that darkened the interiors were replaced by large bay windows. Unnecessary room partitions disappeared to make way for large volumes. Walls and ceilings were painted white.

During the military fighting of 1997, the house becomes a gathering place for neighbors and friends.  Luca was 5 months old and his hammock was installed on the terrace of the Green suite. The helicopters flying up to the Northern front line would fly over the terrace.

With the birth of Naïs, in 1998, the yellow suite is extended and a new bricks house is built which will become the purple suite. The Maison finally has its current structure, composed of five houses side by side.

Later, in order to accommodate her parents and friends, Nathalie bought a beautiful 1940’s wooden house in Sotnikum, a town 30 km down the road to Phnom Penh. It was re-assembled on the advice of a Kru (diviner) in the middle of the property. The Khmer House is a jewel, rough and sober, a dark floor, panels with primitive ironwork to protect the front and rear windows, original shutters that still close.  Like traditional Khmer houses, it is on stilts, with an open air space at the ground floor. During the day this area provides shade and serves as a living space. The upper floor, which is closed on all four sides, provides sleeping accommodation during the night and natural ventilation. The style is Pteah Pet.

Maison Polanka was a great place for Sunday gatherings, parties, birthdays, and treasure hunts in the compound until the family left for Beijing in 2009.

The idea of transforming Maison Polanka into an exclusive hotel was made overnight, in May 2011, as the houses were deteriorating quickly without their owners. The decision was made to come back to Cambodia and the hotel opened one year later.

The volumes of the Maison were modified to create 4 bedrooms with private bathrooms and their terraces. Air-conditioned and all the modern comfort and amenities were added to the rooms with extreme attention to details. The interiors are a mix of traditions and modernity, comfort, antiques and modern art.

French architect Françoise Lavielle designed the restaurant space, the Sala. We wanted a contemporary design to contrast with the traditional wooden houses.

In 2018, a spa was built, using only natural material, palm tree leaves, wood and bamboo – a traditional habitat from rural Cambodia.

The latest addition is the Garden Cottage in 2019, a private villa with 2 bedrooms that can host a family of 4. The house was found in Northern Kompong Thom province, dismantled and rebuilt with the old wood. The style is Pteah Kanteang.

Get special offers and updates from Maison Polanka.